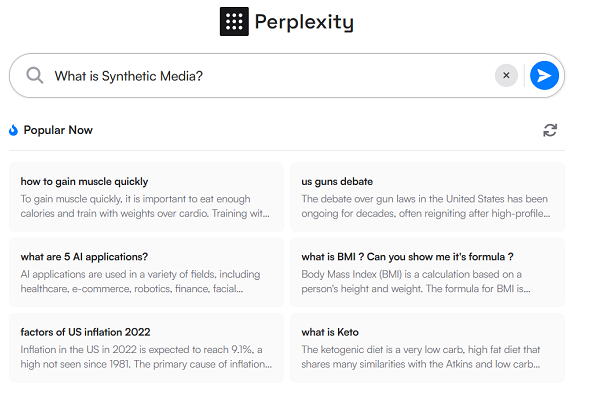 Perplexity.ai has introduced a new conversational search engine designed to provide information through a chatbot-style interface and large language model (LLM) similar to how OpenAI’s ChatGPT works. The difference is that Perplexity uses current information, including footnotes with links to the sources of the data, though it’s still in development and has some caveats attached to its web interface.

Perplexity refers to itself as “an answer engine that delivers accurate answers to complex questions.” Users can ask questions or use keywords to generate an answer compiled from multiple sources, with the warning of possible wrong answers and that users shouldn’t enter personal information.

For instance, when asked, “what is synthetic media,” the response comes back as, “Synthetic media is any media created or modified by algorithmic means, such as through the use of artificial intelligence (AI) and deep reinforcement learning[1] [2]. It can include text-generating, image synthesis, and other tools[3]. Synthetic media is distinguished from non-synthetic media by its high degree of customization and personalization[4][5].”

Each of the numbers links to a footnote with a link to where that information was pulled, enabling users to check if it matches what they are looking for. It’s also good at remembering conversational context and even suggests related searches to help users refine their hunt for information. The response is reminiscent of how some questions typed into Google will cause the search engine to have a brief explanation box before listing its links as usual. That’s not the same as a real conversational search with users refining their requests and iterating answers like talking to a human. ChatGPT hits that requirement but fails on the necessary accuracy and data sourcing, though OpenAI has made a point of saying that it isn’t a search engine, hence the sometimes wildly incorrect answers generated there.

Perplexity is one of several attempts to bridge the gap between those requirements. For instance, search engine developer You.com introduced the YouChat chatbot to offer both conversational AI tools and search. YouChat answers questions as well as suggest ideas for writing and editing prose. It pulls more recent information than ChatGPT but still has accuracy issues. There’s also Jasper Chat, a chatbot format for Jasper’s own generative AI engine that attempts to do something similar. And Perplexity isn’t immune from providing answers that steer users wrong. All of the links appear to work, judging from a brief test, but the answers themselves can be out of date or even change upon repeated requests, as Voicebot and Synthedia founder Bret Kinsella found.

“I asked [Peplexity who the CEO of Twitter was] twice today, and the first time it responded with Parag Agrawal, who is a former CEO of Twitter. The second time it offered the correct answer with some minor inaccuracies in the full response. Interestingly both responses included a source link to Wikipedia.”

Whether Perplexity, YouChat, or a future version of ChatGPT will actually be a rival to Google in search is hard to gauge. It would have been an impossible idea a year ago, but a lot has changed very quickly in the world of conversational and generative AI in the last few months. Google has already begun working on ways to push back against that narrative, reportedly bringing in founders Larry Page and Sergey Brin to brainstorm ways to get ahead in AI chatbots, so expect this industry to become a center of fiery debate for a long time to come.