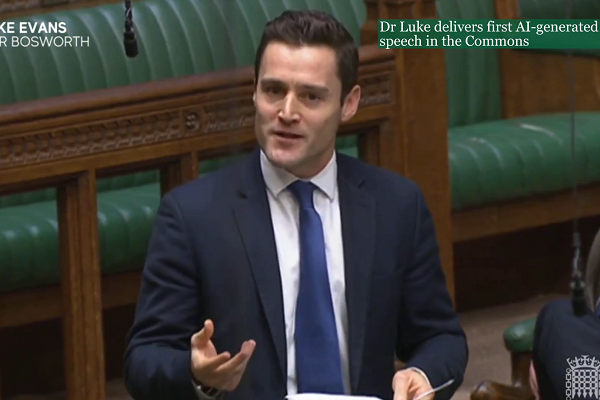 A British member of Parliament gave a speech composed by ChatGPT’s generative AI this week, a first for the House of Commons. Conservative MP for Bosworth Luke Evans read out the speech, which touched on what’s been going on in the UK over the last year as part of a larger speech calling for more regulations around AI, including OpenAI’s suite of tools. He concluded on a lighter note with a Christmas-themed poem also generated by ChatGPT.

The speech ChatGPT wrote managed to hit on Brexit, healthcare, the government’s furlough plan, and other topics in just 324 words. Evans prompted the AI by asking it to “write a Churchillian speech on the state of the United Kingdom over the past 12 months.” The mini-speech’s point was to spark MPs’ interest in how AI technology has evolved and is used. He specifically asked the government to go beyond its current AI regulation groups and add a regulator for algorithms and AI centered on synthetic media and related technology.

“This is an incredible step forward, but with that come huge issues about autonomy, liability, fairness, safety, morality, and even ownership of creativity. We in this House must ask ourselves how we govern this, because so much comes down to algorithms,” Evans said. “The Government have gone some way to dealing with this. The AI Council was formed in 2019, and the National AI Strategy is run by the Office for Artificial Intelligence. I think, however, that we are missing a trick, and that there should be a regulator for algorithms and artificial intelligence, to run concurrently and in synergy with the technology we are developing.”

He punctuated his point by ending the speech with a ChatGPT’s response when prompted for a “rhyming poem about the Houses of Parliament at Christmas.” You can watch the whole speech above and see the poem below.

“As Christmas approaches and the air grows cold,
The Houses of Parliament stand grand and bold.
The Speaker presides, with wisdom and grace
Over the debates, in this special place.
The halls are decked with holly and cheer,
As politicians gather, year after year,
To discuss the issues, that matter most
And find solutions, to the problems they host.
But on this festive night, as the fire burns bright
They pause for a moment, to appreciate the sight
Of the snow-covered streets, and the city aglow
And the warmth of the season, that we all know.
So on this Christmas Eve, as the clock ticks by,
We give thanks for all, both low and high,
For the Houses of Parliament, and all they do
Merry Christmas to all, from me and you.”