Alexa is officially a chatbot. Yesterday, Amazon began rolling out a new feature on iOS that enables users to type their requests to Alexa and see responses on the screen. This is yet another update Amazon has made this year in its Alexa mobile app as the company attempts to extend the voice assistant’s utility beyond the home. It will also be welcomed by many users as a big convenience since Alexa services will now be available without making a sound. Others will wonder why a chatbot is a necessary update.

In July, the company overhauled the mobile app to make Alexa more prominent and encourage voice assistant access through smartphones. Prior to this update, the app’s design was focused more on configuring devices and controlling user settings. This move was preceded by enabling wake word activation for Alexa while using the mobile app. Users needed to tap the Alexa icon before this time to access the assistant.

Using Alexa as a Chatbot

Amazon has not rolled the texting interaction feature out fully yet. If you have access, you can find it by going into the Alexa app and scrolling down to the announcement cards. This is where Amazon often promotes new functionality. There is a card with an image that says, “Now you can type with Alexa.” Click the “Try Now” button and it will put you into a typical chatbot layout with Alexa speaking on the left and your responses on the right. From there, start typing in your favorite Alexa commands.

Alexa starts off the conversation with a disclaimer that the feature is in preview. The timer feature works as you would expect. It even gives you a top-of-the-app banner notification when your timer is done in addition to the audible notification. 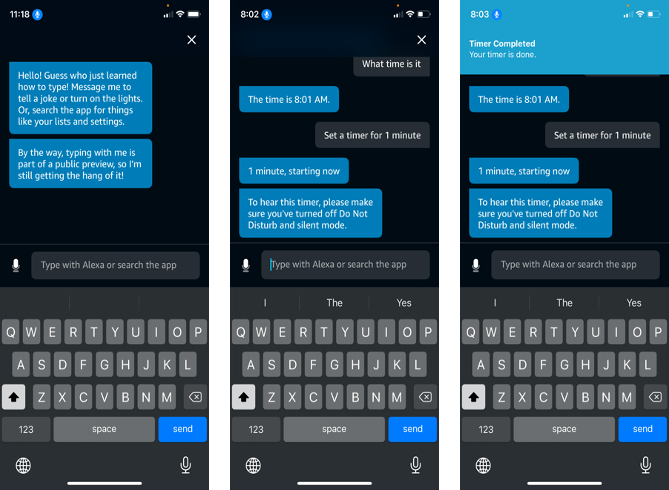 It appears that all interactions, including media playback, will work through the app with the new functionality. I was able to get Invoked Apps’ Sleep Sounds to play without a problem and it even suggested sounds for me to try. When I tried later to invoke this skill again you can see that the typing panel offered suggestions from my previous request for sleep sounds as well as a new suggestion to “Play Jazz.” This means Alexa is recalling requests from previous sessions. When I returned to the Sleep Sounds, it welcomed me back and offered a more streamlined introduction as you would expect. Granted, I have used Sleep Sounds previous to typing into Alexa but it may be that I was treated as new because it was the first time I had typed the request or because I had not invoked the skill in a few weeks. 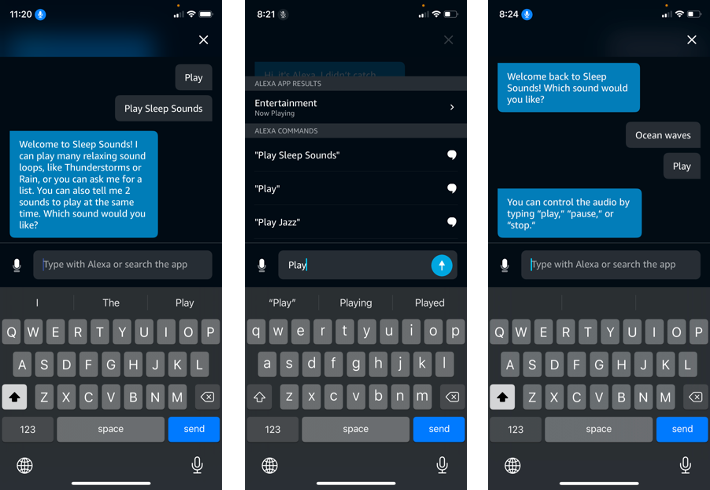 At some point in my chat conversation with Alexa, I was also prompted to set a news source. Alexa asked if I would prefer to set a preferred channel and suggested NPR, Fox News, and Washington Post as options. I said NPR but Alexa could not access it. I then followed up with Fox (not pictured) and Alexa responded by telling facts about the animal fox. I simply typed in Fox News and then it started playing recognizing the earlier context from the chat. Alexa has a lot of features that most users don’t know exist. The obvious solution is to have Alexa suggest new items to try to raise awareness and drive the discovery of either first-party or third-party skills. However, if Alexa makes spoken suggestions too frequently it undermines user experience. There are many comments online that claim Alexa is already too chatty. This means Amazon has to be parsimonious with its spoken suggestions. By contrast, Echo smart displays regularly suggest users try new screens by placing the suggestion silently on the rotating screen. This is an unobtrusive way to increase awareness without interrupting a user. The same strategy is being used in the Alexa chat interface. If you don’t care to take advantage of the suggestion, you simply ignore it and move down the screen.

Speaking is the most efficient and usually the most convenient way to invoke your voice assistant to get information or a task done. However, there are times when speaking is not optimal. If you want to turn on ambient noise before going to bed and don’t want to disturb a sleeping partner is one example. Another is activating soothing music or turning off a light when putting a baby down for a nap. Or, maybe you are watching a movie with the family and want to perform some task with Alexa without interrupting the dialog. Then there is Alexa use in public. You might want access to Alexa without the request or response overheard by those nearby.

Granted, many things you do with Alexa can be done by other apps on your smartphone with a couple of taps and swipes. The question then will be whether going to Alexa or another app makes the most sense. Voice will remain the dominant interaction method but text-based communication has utility. Any voice assistant that wants to be used throughout the day and flexible enough to engage in different contexts needs this feature. Google Assistant has had it since rolling out on smartphones back in 2016-2017. In fact, Google actually made it a requirement for all Assistant Actions to support text interaction back in 2017.

When you do want to use typing with Alexa, you can simply access it from the app home screen. A keyboard icon will appear in the upper left of the screen after you have used the feature once. This appears to only be available on iOS at the moment. My Android app update did not include an option to activate the chat typing feature.

Let me know what you experience is typing on Alexa by sharing information via Twitter (@bretkinsella). Is this the Alexa feature you have longed for? Is this a waste of time? Did everything work well for you? Do you plan to use Alexa as a chatbot in the future?