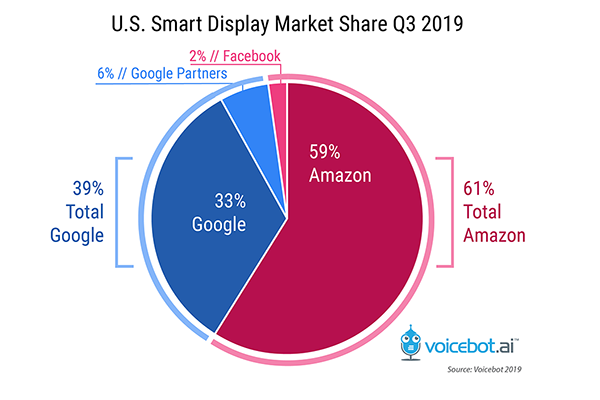 Amazon Echo Show and Spot, both introduced in 2017, were the first smart displays. These devices integrate voice assistant based user interfaces with display screens to augment conversational interaction with images and video. At the end of 2018, Amazon’s first-mover advantage was evident in its 67% device market share in the U.S. All of the smart displays to date have adopted either Alexa or Google Assistant as a voice interface and that includes Facebook’s Portal which uses Alexa.

Google Assistant based smart displays began arriving in the U.S. from third parties such as Lenovo, JBL, and LG in the late summer and autumn of 2018 and then from Google directly in October. Around the same time, Facebook launched its Portal smart display with Alexa. As a result, at the end of Q3 2019, Google Assistant based voice assistants and Facebook Portal had been available for a full year while Amazon’s offerings were celebrating two years in the market. Whether or not smart display adoption continues to grow is an open question. There is still very little content optimized for smart display experiences. The device makers tend to emphasize use cases for cooking in the kitchen, smart home control, and video chat. The latter is the most obvious benefit of smart displays that is truly device optimized. Growth of smart display adoption will require a stronger rationale about how they are superior to the experiences offered by the less expensive smart speakers. That means either the video chat use case needs to become more popular or new content and experiences will need to be developed for the devices. It is not clear either of these will arrive in time for the Q4 holiday season.