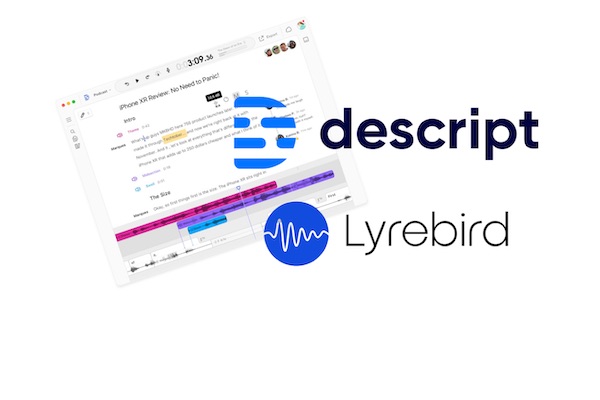 TechCrunch reported this morning that Descript has acquired synthetic voice generation company Lyrebird and closed a $15 million funding round led by Andreessen Horowitz and Redpoint. Lyrebird is well known in the voice technology community for its online voice synthesis demo which enabled users to speak a number of phrases and the service would generate a synthetic voice of the user. That demo appears to be gone as the old Lyrebird website now redirects to a page on Descript’s site.

Lyrebird had previously raised $120,000 as part of its Y-Combinator participation in 2017. Pitchbook lists the company’s post-money valuation as $1.71 million at the time. Terms of the acquisition of the Montreal-based company were not disclosed. The reason Descript wanted Lyrebird’s technology is for the new Overdub feature that will enable podcasters to more easily add audio to previously recorded materials. Descript was originally focused around what it calls Audio Word Processing for podcasters but a recent update also enables users to record podcasts directly in the software and automatically generate transcripts.

The new investment from Andreessen Horowitz follows a $5 million seed investment by the firm in December 2017 when the company was founded and separated from its progenitor, Detour. Descript’s post-money valuation at the time was $25 million according to Pitchbook data. Andrew Mason, best known as the founder of Groupon, also founded Descript which he spun out of Detour, an earlier company which raised $10 million and eventually was sold to Bose for an undisclosed amount. Detour was an audio tour guide solution and the company built the solution underlying Descript in order to more easily edit their audio files.

How Lyrebird and Overdub Will Benefit Podcasters Descript started as an audio transcription software solution and later added a “white glove” human transcription option. The key value behind the solution is the transcription editor. It enables you to correct text inline without changing the audio in order to correct transcription errors or you can delete the text and have the audio automatically reflect the removal. Lyrebird is the technology behind Descript’s new Overdub feature. If the user has taken the step to create a Lyrebird synthetic replica of their voice, they can actually insert words or replace words in the text editor and Descript will insert the audio as if the speaker had said the word or phrase.

The benefit according to Descript is saving time when minor updates need to be made to audio files. In the past, if a number was stated incorrectly and needed to be updated in an audio file, the podcaster would need to record the correct word and then splice it into the audio. This takes time and can be cumbersome for podcasters that are not skilled in audio production and editing. Changing by text and having the Lyrebird solution overdub the audio takes a matter of seconds. It may not quite match the quality of splicing in a human voice recording, but it does offer the benefit of efficiency.

Descript has taken steps to prevent this technology from being used for deep fakes. Mason notes in a blog post this morning “Rest assured, you can only use Overdub on your own voice. We built this feature to save you the tedium of re-recording/splicing time every time you make an editorial change, not as a way make deep fakes… in order to train a voice model, you need to record yourself speaking randomly generated sentences, preventing others from using pre-existing recordings to create a model of your voice.”

Collaboration is the Differentiator

Mason suggests in the TechCrunch interview that Descript’s collaboration feature is its key differentiator. There are many transcription and audio editing tools on the market but they are designed for use by individuals. “In live multiuser collaboration, there is still no other tool out there that has done what we have done with large uncompressed audio files. That is no small feat, and it has taken time to get it right. I have seen this transition manifest from documents to spreadsheets to product design. No one would have thought of something like product design to be huge space but just by taking these tools for collaboration and successfully porting them to the cloud,” Mason told TechCrunch’s Ingrid Lunden.

This comment is underscored by the fact that the editor and collaboration tools are the company’s core innovation. Mason said that Descript has not developed its own natural language processing (NLP) technology but instead uses Google tools for transcription. His view is that this space is largely a commodity today. The editing and collaboration tools are what makes Descript unique and now Lyrebird enhances that with some core technology differentiation.