Apple and Spotify each reported earnings on Tuesday and there were a few key points in each company’s earnings report that pertain to the world of audio, voice, and hearables. In particular, we can start to see how an aural attention economy is taking shape alongside the visual attention economy ushered in by the mobile era. Apple and Spotify are positioning their product lines to both take advantage of this shift and facilitate its rise. 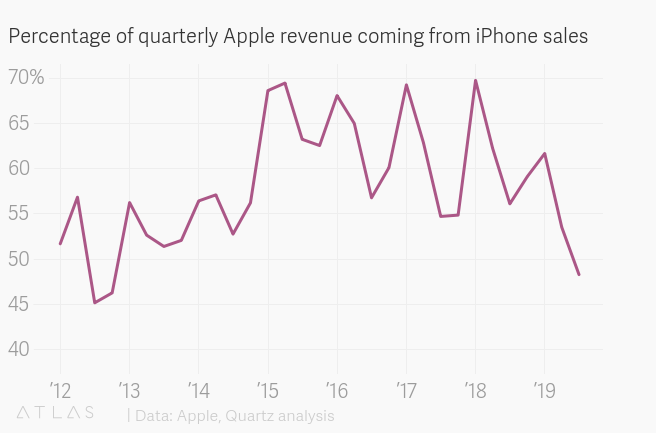 The narrative that surrounds Apple has changed recently from being centered around the iPhone’s sales growth to a narrative more focused around wearables and services. This new narrative, which I wrote about in Voicebot after Apple’s previous earnings report, has become even more pronounced this quarter as Apple’s revenue becomes less dependent on the iPhone and continues migrating toward wearables and services. For the first time in 7 years, more than half of Apple’s revenue came from products outside of the iPhone. 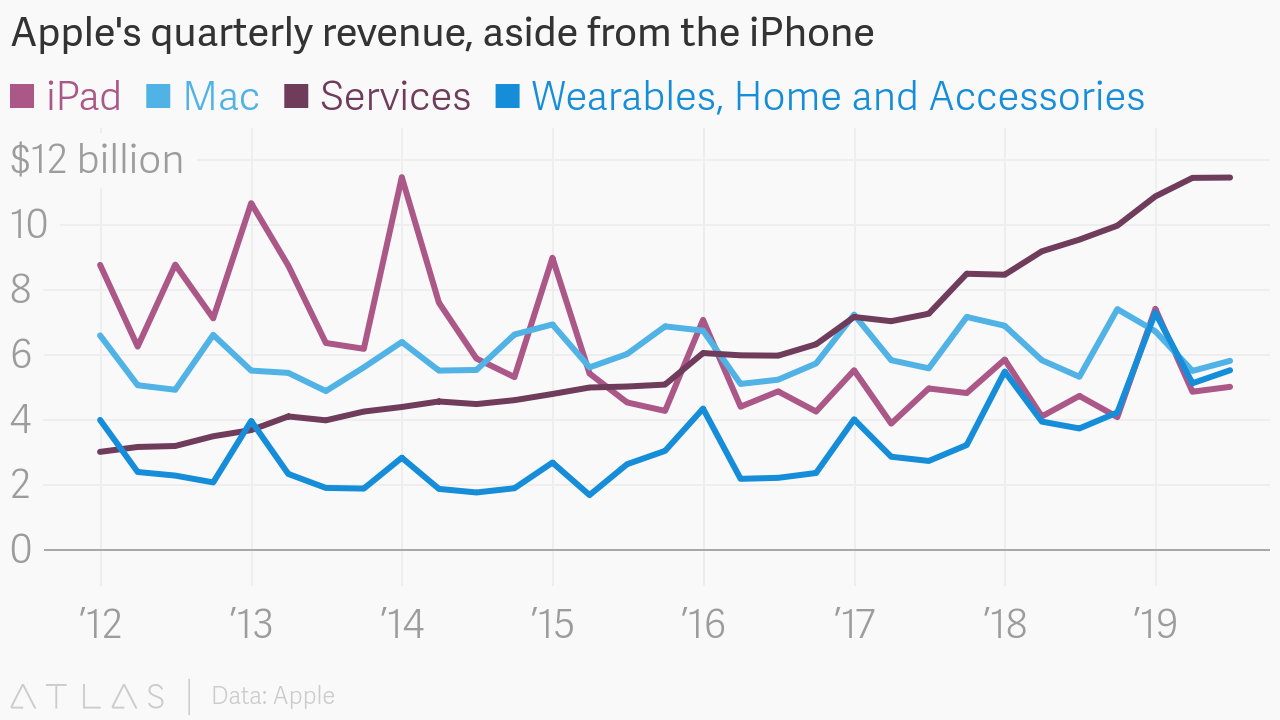 Apple lumps AirPods, Watch, HomePod, Beats, and Apple TV into its “wearables, home and accessories” category (among a few other small products). It’s hard to know how much each product within the category is contributing to the total number, but given Tim Cook’s propensity to broadly refer to the category as, “wearables,” HomePod’s lackluster penetration into the smart speaker market, and the lack of attention Apple has put toward Apple TV’s innovation and marketing over recent years, it seems likely that the vast majority of this category’s revenue is tied specifically to the wearables (Watch, AirPods, Beats). 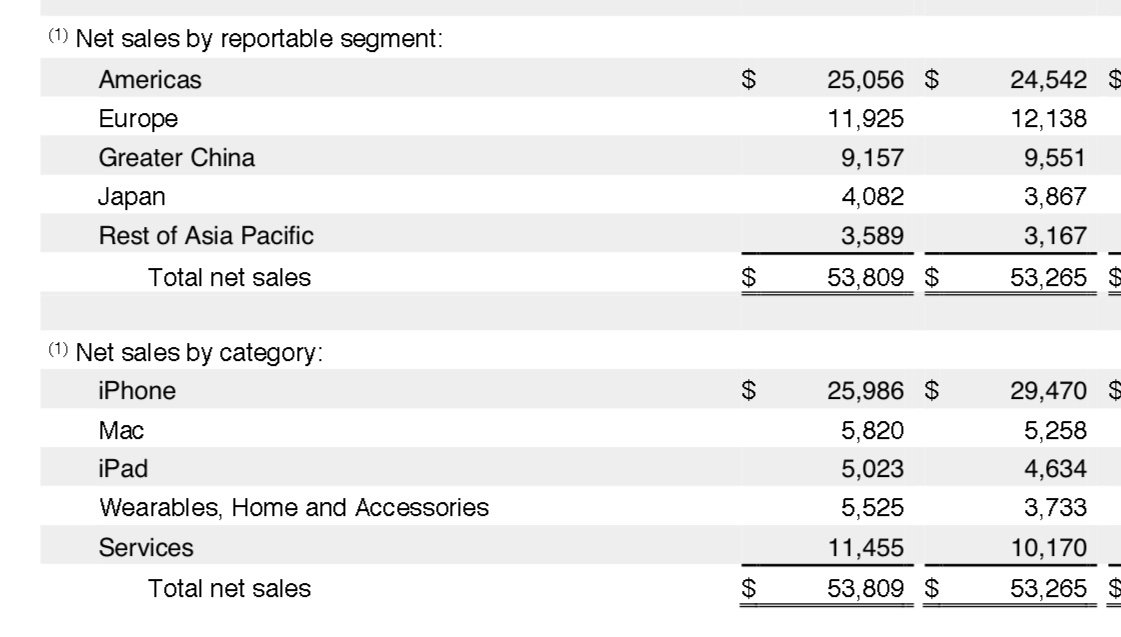 Apple’s wearables and services revenue combined for roughly $16 billion this quarter, making it a $64 billion annual business inside the business. Apple CEO, Tim Cook, stated on the earnings call that, “it was a blowout quarter for wearables. When you combine wearables and services together, they combine to make a fortune 50 company.” (Prudential Financial sits at #50 doing $62 billion annually). Looking at the year-over-year quarterly comparison of Apple’s financials, this new narrative shows in the numbers, as the wearables category was up 48% annually, while iPhone sales were down same quarter as last year by 13%.

Apple’s Watch, Beats, and AirPods will play a critical role in its foreseeable future, which was made apparent with the rollout of the recently revealed, hearables-specific chipset, the H1 chip, included in AirPods v.2 and PowerBeats Pro. One of the first applications supported by the H1 chip is “Hey Siri” activation, which makes one wonder if Siri is bound to play a bigger role within Apples hearables’ future as well. As I mentioned in my previous Apple earnings write-up, if Apple were to one day get Siri right, Apple would already have a swelling user base of near-field Siri users in its AirPods and Beats customer base that it could push an enhanced version of Siri to overnight.

Earlier this year, I wrote a two-part piece for Voicebot detailing what I viewed to be an impending, “Cambrian explosion of audio content.” Since that piece, the “aural attention economy” that I wrote about continues to burgeon and one company that is positioning itself well to monetize via our ears is Spotify.

Spotify recently shifted much of its focus to podcasting, including an app redesign that puts podcasting front and center, as well as a slew of podcasting-specific acquisitions. Spotify’s motivation for pivoting toward podcasts is multi-faceted. The most obvious reason stems from its gross profit margins. Spotify spends about 75% of its revenue on royalty agreements with the four major record labels just to license the labels’ music; the music side of Spotify’s business is not very profitable.

Its acquisition of high-end podcast production studios, Gimlet Media and Parcast, enables Spotify to make its own content. Proprietary content serves as a long-term buoy to gross profit margins due to the absence of royalty agreements and creates a defensible moat for the service as well, similar to Netflix’s own content, such as Stranger Things. Perhaps the more intriguing acquisition, however, was podcast hosting platform, Anchor.

Spotify: “our ambition is to reinvent the podcasting ad experience by building a new tech stack to enable targeting, measurement, and reporting capabilities like we have for our core Ad-Supported offering.”#podcast $spot @spotify

Prior to Spotify’s acquisition, Anchor had just rolled out a new ad-tool called Anchor Sponsorships, which was designed to more intelligently match brands to podcasters and their audiences. So, flash-forward to Spotify’s earnings call where we have Spotify CEO, Daniel Ek, describing a new ad-tool tech stack, which sounds an awful lot like the way Anchor was describing Anchor Sponsorships prior to the acquisition.

It’s important to consider the unique view that Spotify has into the consumption and production sides of the podcast offering, as it can gather analytics from the listeners and the podcast creators (via Anchor). It’s conceivable that Spotify will build on what Anchor started with Sponsorships, and help brands to hyper-target to podcast audiences, which would potentially make monetizing feasible for podcasts of all sizes. Spotify might also be priming its curation machine for podcasts as well, making it an even more attractive service to use for podcast consumption and production.

“Our podcast audience grew more than 50% Q/Q and has nearly doubled since the start of the year.”

Apple’s focus on hearables and the chips contained inside them will help drive the aural attention economy forward from a hardware perspective. Over time, we should see Apple increase the battery life of the devices with future iterations of the H-series chip, as well as new, hearables-specific features. Ultimately, we should see companies like Apple make hearables more appealing to the broader public by allowing them to do more. It’s in Apple’s best interest to ensure AirPods continue to dominate our ear-share.

Spotify’s acquisitions and pivot toward podcasting puts the company in as good of a position as any to figure out how to innovate around podcast monetization, discovery and curation. Adding its user data and resources to Anchor’s advertising tools, might be the key to properly connecting brands to podcasters, and then podcasts to audiences. As the hardware continues to mature in its capabilities, and audio content consumption and production enhanced, there’s then more incentive for consumers to stay tuned into the aural attention economy longer and more frequently.