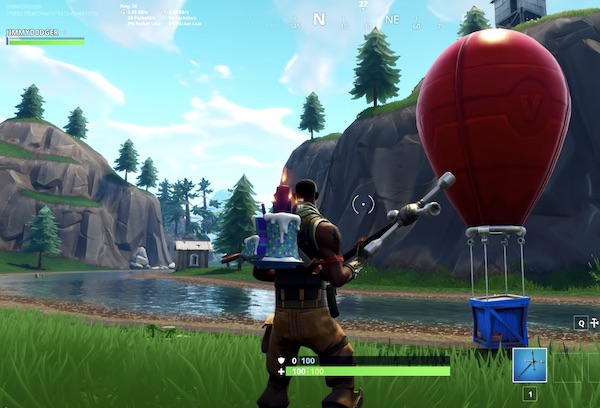 Jamie Grossman, a U.K.-based Fornite player, software developer, and Alexa Developer Advocate recently deployed a private Alexa skill to assist him in gameplay and to have a fun project for his YouTube channel. His rationale was that combining a voice assistant and smart home technology would enable deeper immersion into Fornite and improve gameplay. Fortnite is a popular first-person shooter game by Epic Games that you can purchase or play a free version online version called Battle Royale which is a real-time competition against other players. Grossman commented in the video:

“Season six of Fortnite has been out for just about a week, and I came to a very, very unfortunate realization. I am just not that good…I think that most people that play Fortnite, like me, just aren’t that good. But, is it our fault? Are we not playing enough? Do we need to practice more? No, no, no, no. We are not immersed enough in the game. There must be more that we can do with the use of technology to feel more in the game. It just makes sense on paper that would make us be better at the game.”

The Alexa for Fortnite Solution

Grossman’s solution included an Alexa skill that uses optical character recognition (OCR) to read his health and hit points status from the screen that was then processed and turned into information he could request of his private Alexa skill. He also used the OCR data to determine the relative level of his character’s health because the game subtly changes the screen coloring as health fades. This allowed him to use a LIFX smart light bulb (U.S. version here) that could change colors in the room to match his health level. Finally, he set up a fan and using a TP-Link HS100 Smart Plug, it would activate and blow air on him whenever the OCR recognized that he was flying in the game. His solution for identifying this game state was clever. Below is the schematic he used to describe the solution. The quick translation is that Grossman used some Python code, Fortnite, and an OCR system to transform visual gameplay into data. That data could then be parsed so an Alexa-enabled device could respond to spoken queries about player status. It also was used to control a smart light and smart plug to change the color of the light or start the fan. According to his YouTube notes, his bill of materials for the project included:

The Fornite Plus Alexa and Smart Home Results

Grossman describes how he set up the system in the first seven minutes on the video. The balance of the video shows excerpts from his using the solution in 10 matches against other players. I will let you see for yourself how it all played out. He’s not likely to challenge Ninja anytime soon for top Fornite honors, but it may actually help competing against less-accomplished players.

In all, it is a clever solution that shows how voice interaction can enhance gameplay. It reminds me of the Call of Duty Alexa skill that offers coaching to improve gameplay, but Grossman’s Fornite solution goes further by actually serving as a tool to assist the player in real-time. However, don’t expect to see this in the Alexa skill store anytime soon. There are dozens of Fortnite Alexa skills with game tips and drop locations. These don’t actually integrate with gameplay. Elliott says that without an API from Epic Games the Alexa solution is impractical for most users and likely would not pass certification. With that said, he offers enough detail in the video that some enterprising players could replicate his solution and employ Alexa as a battlefield assistant.