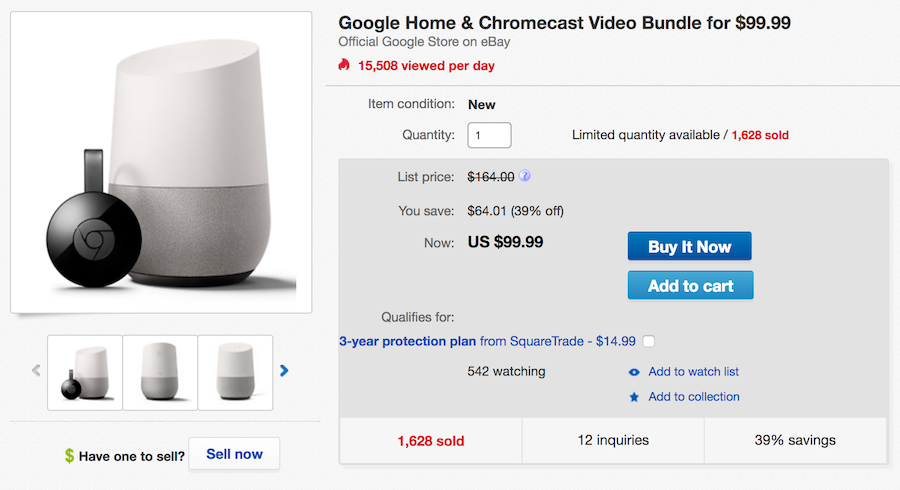 The discounting gambit is not new to Google, but it must be cognizant of how aggressively Amazon is pricing its devices. Amazon frequently discounts the original Echo from $179 down to $139 or $129 to match the list pricing of Google Home. When it launched the Echo Show, it offered $100 off if you purchased two devices. Just last week, it was selling refurbished Echo Dots for $29.99, below the already low selling price for new devices of $49.99.

The low price point does two things for Amazon. First, it helps introduce price sensitive consumers to the Alexa voice assistant for the very first time and starts the habit formation around the Amazon solutions. Second, the pricing encourages users to populate multiple rooms with devices. Google doesn’t have a good answer to that strategy, but this bundle is about something else.

The Google Answer to Echo Show

This is Google’s combination that is supposed to rival the Amazon Echo Show. While Echo Show has Alexa baked into a device with a small screen, Google is betting that consumers already have plenty of screens and can just connect them via a Chromecast plugin. Why buy an entirely new device if you already have televisions in multiple rooms and just need to add a Chromecast with Google Home to bring forth the voice and video experience.

This is true to an extent. I have the Chromecast plus Google Home setup and it can bring up YouTube or Netflix with a simple spoken command. However, I cannot initiate a video call, use a video intercom feature, or call up a Google Action news app on my screen today. These are all core features of Echo Show. Google will get there on its own and there are some third party applications in development to support similar features. The key for Google right now is to get its smart home infrastructure in place before Amazon takes a dominant position in too many households. Chromecast and Google Home are central to that strategy and the bundle on sale through eBay is a good deal for anyone looking to make a long term bet on the Google ecosystem.